At first I pretended that my reasoning was high-minded and philosophical. But really I just wanted to drink gallons of cheap sangria and sleep around. Four years of this and I was strung out, stupefied and generally pretty low. Especially when I was sober or alone.

My parents, who are strong believers and who raised their kids as well as any parents I’ve ever seen, were brokenhearted and baffled. (See sidebar story below.) I’m sure they were wondering why the child they tried to raise right was such a ridiculous screw-up now. But God was in control.

One Tuesday morning, before 8 o’clock, I went to the library to check my e-mail. I had a message from a girl I’d met a few weeks before, and her e-mail mentioned a verse in Romans. I went down to the Circle K and bought a 40-ounce can of Miller High Life for $1.29. Then I went back to where I was staying, rolled a few cigarettes, cracked open my drink, and started reading Romans. I wanted to read the verse from the e-mail, but I couldn’t remember what it was, so I started at the beginning of the book. By the time I got to chapter 10, the beer was gone, the ashtray needed emptying and I was a Christian.

The best way I know to describe what happened to me that morning is that God made it possible for me to love Jesus. When He makes this possible and at the same time gives you a glimpse of the true wonder of Jesus, it is impossible to resist His call.

Looking back on my years of rejecting Christ, I offer these suggestions to help you reach out to your wayward child so that they, too, would wake up to Christ’s amazing power to save even the worst of us.

2. Pray.
Only God can save your children, so keep on asking Him to display Himself to them in a way they can’t resist worshiping Him for.

3. Acknowledge that something is wrong.
When your daughter rejects Jesus, don’t pretend that everything is fine.

If you know she’s not a believer and you’re not reaching out to her, then start. And never stop. Don’t ignore her unbelief. Ignoring it might make holidays easier, but not eternity.

4. Don’t expect them to be Christlike.
If your son is not a Christian, he won’t act like one, and it’s hypocrisy if he does. If he has forsaken your faith, he has little motivation to live by your standards, and you have little reason to expect him to.

If he’s struggling to believe in Jesus, there is little significance in his admitting that it’s wrong to get wasted, for instance. You want to protect him, yes, but his most dangerous problem is unbelief—not partying. No matter how your child’s behavior proves his unbelief, always be sure to focus more on his heart’s sickness than its symptoms.

5. Welcome them home.
Because your deepest concern is your son’s heart, not his actions, don’t create too many requirements for coming home. If he has any inkling to be with you, don’t make it hard for him. God may use your love to call him back to Christ. Obviously there are instances when parents must give ultimatums: “Don’t come to this house, if you are …” But these will be rare. Don’t lessen the likelihood of an opportunity to be with your child by pushing him away with rules.

If your daughter stinks like weed or an ashtray, spray her jacket with Febreeze and change the sheets when she leaves, but let her come home. If you find out she’s pregnant, then buy her folic acid, take her to her 20-week ultrasound, protect her from Planned Parenthood, and by all means let her come home. If your son is broke because he spent all the money you lent him on loose women and ritzy liquor, then forgive his debt as you’ve been forgiven, don’t give him any more money—and let him come home. If he hasn’t been around for a week and a half because he’s been staying at his girlfriend’s—or boyfriend’s—apartment, urge him not to go back, and let him come home.

6. Plead with them more than you rebuke them.
Be gentle in your disappointment.

What concerns you most is that your child is destroying herself, not that she’s breaking rules. Treat her in a way that makes this clear. She probably knows—especially if she was raised as a Christian—that what she’s doing is wrong. And she definitely knows you think it is, so she doesn’t need this pointed out. She needs to see how you are going to react to her evil. Your gentle forbearance and sorrowful hope will show her that you really do trust Jesus.

Her conscience can condemn her by itself. Your role is to stand kindly and firmly, always living in the hope that you want your child to return to.

7. Connect them to other believers.
Obviously, you are distant from your wayward child; otherwise you wouldn’t think they’re wayward. This is another reason why pleading is better than rebuking—your relationship with your rebellious child is tenuous and should be protected if at all possible.

But rebuke is still necessary. A lot of rebellious kids would do well to hear that they’re being fools, but you’re probably not the one to tell them. Try to keep other Christians in their lives and trust God to connect your son or daughter with a believer who can point out your child’s folly without getting the door slammed on them.

8. Respect their friends.
Of course your daughter’s relationships are founded on sin. And, yes, her friends are bad for her. But she’s bad for them, too. And nothing will be solved by making it evident that you don’t like who she’s hanging around with.

Be hospitable. Her friends are someone else’s wayward children, and they need Jesus, too.

9. E-mail them.
When you read something in the Bible that encourages you and helps you love Jesus more, write it up in a couple of lines and send it to your child. The best exhortation—better than any correction—is for them to see Christ’s joy in your life.

Don’t stress out when you’re composing these as if each one needs to be singularly powerful. Just whip them out and let the cumulative effect of your satisfaction in God gather up in your child’s inbox. God’s Word is never useless.

10. Take them to lunch.
If possible, don’t let your only interaction with your child be electronic. Get together with him face to face if you can. You may think this is stressful and uncomfortable, but trust me that it’s far worse to be in the child’s shoes—he is experiencing all the same discomfort, but compounded by guilt. So if he is willing to get together with you for lunch, praise God, and use the opportunity.

It may almost feel hypocritical to talk about his daily life, since what you really care about is his eternal life, but be sure to do it anyway. He needs to know you care about all of him. Then, before lunch is over, ask about his soul. You don’t know how he’ll respond. Will he roll his eyes like you’re a moron? Will he get mad and leave? Or has God been working in him since you talked last? You don’t know until you risk asking. God will give you the gumption.

11. Take an interest in their pursuits.
Odds are that if your daughter is purposefully rejecting Christ, then the way she spends her time will disappoint you. Nevertheless, find the value in her interests, if possible, and encourage her. You went to her school plays and soccer games when she was 10; what can you do now that she’s 20 to show that you still really care about her interests?

Jesus spent time with tax collectors and prostitutes, and He wasn’t even related to them. Imitate Christ by being the kind of parent who will put some earplugs in your pocket and head downtown to where your daughter’s CD release show is. Encourage her and never stop praying that she will begin to use her gifts for Jesus’ glory instead of her own.

12. Point them to Christ.
This can’t be stressed enough. It’s the whole point. No strategy for reaching your son or daughter will have any lasting effect if the underlying goal isn’t to help them know Jesus.

The only ultimate reason to pray for them, welcome them, plead with them, eat with them, or take an interest in their interests is so that their eyes will be opened to Jesus Christ.

And not only is He the only point, but He’s the only hope. When they see the wonder of Jesus, satisfaction will be redefined. He Himself will replace the money, or the praise of man, or the high, or the sex that they are staking their eternities on right now. Only His grace can draw them from their perilous pursuits and bind them safely to Him—captive, but satisfied.

God will do this for many. Be faithful and don’t give up. 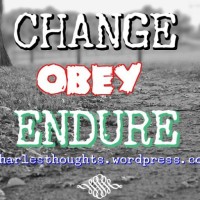 Not So Random Thoughts of a Random Person

Life is a Journey

When God said it, He actually meant it, so do it!

Encouraging Women To Draw Closer To Christ From The Inside Out

Because of Christ Inspirational Poetry

God designed us to live in community, first with him and then with one another.

My Walk, His Way - daily inspiration

The heavens are telling the glory of God; and the firmament proclaims His handiwork. Psalms 19:1

Hope On The Road Less Traveled

You Can Trust Him.

God's Faithfulness for the Grieving Parent